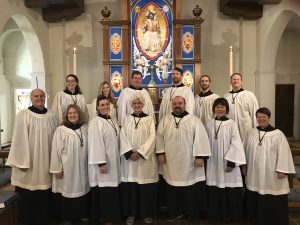 The congregation of St. Luke’s now has a well-earned reputation for singing. This may be one of the few small parishes where the congregation routinely sings in four-part harmony, and the sopranos in the congregation are always game for trying the descants that are printed in The Hymnal 1982, the primary source of congregational music. There are usually four hymns in the morning worship as well as the service music: the Gloria in Excelsis (or Kyrie Eleison), the Sanctus and Benedictus, and the Agnus Dei. The congregation knows five settings of the service music, which are sung in rotation throughout the liturgical year. And on certain occasions, the congregation even sings a couple of the canticles in Anglican chant.

The St. Luke’s Choir is composed of four professional staff singers and seven (as of this writing) volunteers from the parish. The choir has built up a large repertory of music from plainsong through the 21st Century although, as we like to say, we are especially fond of Renaissance, Baroque, and anything from The Oxford Book of Carols. Whenever possible, our music is tied to the liturgical year and the Biblical lessons assigned to the day. It takes a lot of work to make a choir sound this good, and it all starts with the 9:00 warm-up on Sunday morning. Because of the daunting traffic surrounding Monrovia, the choir stopped holding Thursday night practices and now rehearses on Sunday after church.

The St. Luke’s Choir sings every Sunday morning from September through May, except for two Sundays off which are covered by soloists. During the summer, volunteers from the choir and other guest musicians often lead the services. The choir also sings the service on Christmas Eve, Ash Wednesday, and Maundy Thursday. 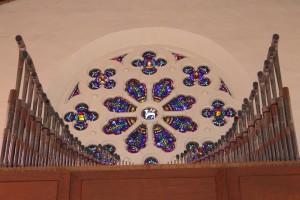 The pipe organ (affectionately known as Lucille) installed in 1967, is a very fine Bascom & Vaughan three-manual organ with 42 ranks and a separate antiphonal division. Many years ago, St. Luke’s had acoustical batting on the ceiling and a heavy carpet down the center aisle. When these were removed, the church was left with an organ that sounded entirely too loud and raucous. Manuel Rosales and crew reworked the organ pipes to suit the building. The result is an organ that is our pride and joy and acoustics that are second to none.

The piano is our newest – and oldest – acquisition, and we couldn’t be happier about it.  It is an 1889 Steinway Model A, and it had been thoroughly rebuilt before being offered at auction.  We were able to pay the selling price with funds raised by the choir through Dinner & A Show; donors from the parish paid for the taxes, costs, and accessories.  The piano has a wonderfully even touch and an exceptional sound.  We are looking forward to using it to expand our musical offerings at St. Luke’s.

Evensong, an afternoon service that is mostly music and is a particular favorite of Episcopalians, was re-introduced to St. Luke’s when Kent Jones became music director in 2004. The language is mostly taken from the 1662 Book of Common Prayer, although the settings of the music range from medieval to modern. We maintain a large e-mailing list of friends of the parish who cannot be here on Sunday mornings but do not want to miss Evensong. Similarly, we often have guest singers who cannot be here on Sunday mornings but enjoy joining the choir for these services, which are usually held on the third Sunday of the month in October, January, March, and May. Evensong is always followed by a wine and cheese reception in Guild Hall, and we do love a good reception.

When St. Luke’s revived Evensong in 2004, it was alone among the smaller parishes in the area in doing so. Since then, other churches in and around the San Gabriel Valley have asked for our guidance and have started singing Evensong themselves. Sometimes two parishes have gotten together to combine forces to make this happen for the first time. This is one kind of outreach that we have particularly enjoyed.

Evensong Invitationals are possibly unique to St. Luke’s and have become the services for which we are best known in the Diocese. In the fall of 2004, there were five singers in the St. Luke’s Choir, and Kent Jones had just started directing. The Vestry was hoping to do something special for St. Luke’s Day on October 18. Mr. Jones, a veteran of many years of Evensongs, invited a few tenors and basses from other choirs to join the two men in the St. Luke’s Choir for the very first Men’s Evensong Invitational. The event has grown considerably since then, and now the singers represent parishes from all over the Diocese – and beyond. The idea was to put together a choir of men who are mostly coming from smaller churches that do not have the resources on their own to have a choir of tenors and basses. After the Fourth Annual Men’s Evensong for St. Luke’s Day, the women of the St. Luke’s Choir demanded equal time, and so began the Women’s Evensong Invitational in Lent, which has become an annual event and has many guest singers from nearby parishes who want to come back year after year.

The music program at St. Luke’s is decidedly ambitious for a parish of this size. We have been blessed with an excellent pipe organ, a massive music library, a choir of fine musicians who have a genuine camaraderie, and world-class acoustics. We also have a congregation that appreciates the work the choir does and has a taste for excellence in music.

Other Music Offerings:  Our wonderful acoustics have made the Parish of St. Luke a highly desired venue for various music performances.  The San Gabriel Valley Choral Company, makes St. Luke’s its home venue for a series of concerts throughout the year.  High F’lutin, a flute ensemble, also presents periodic concerts in our sanctuary.  In recent years, we have also made our space available for a variety of recitals done by students and faculty of Azusa Pacific University.