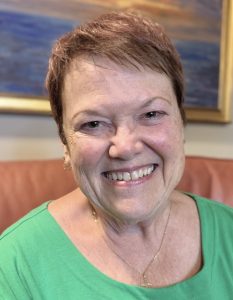 It is with Profound sadness that we must inform you that our administrator, Trish Gresham died after a grueling fight with Pancreatic Cancer on Sunday March 15 at 9:56 am.  She will be deeply missed.  Rest in Peace dear friend.

We will be searching for a new administrator in the near future.

Trish, born and raised in Southern California, is a second-generation Californian.  She retired after 36 years as an employee of the Federal government, spending a large part of her career as a court reporter for the United States Air Force at Andersen Air Force Base on the island of Guam and at George Air Force Base in Victorville, California.  She completed her civil service with an assignment to the U. S. Postal Inspection Service in Pasadena.  After retirement, she started her own business as a court transcript and deposition proofreader.  She previously volunteered at Monrovia Canyon Park, Wildrose Elementary School and as a board member for the Monrovia Historical Museum.  Currently, she is a member of PEO and the Monrovia League, and volunteers with the National Ataxia Foundation.

Trish began attending St. Luke’s in 2000.  St. Luke’s has become her home and the congregation her family.  She is a member of the choir and serves as the choir librarian.  She is also a member of the Altar Guild and leads the Care Team.  In February of 2014, she was hired as the Rector’s Associate for Administration.