was born in Bellflower, California, and grew up in Orange County.  She has a Master’s degree in English literature as well as a business degree.  She is a CPA, and has worked in both public and private companies. She has also done some volunteer work – most recently having been on the Audit Committee for the West End YMCA in the Inland Empire.

Linda and her family have attended St. Luke’s Episcopal Church for almost 30 years.  “My husband, Sean and I originally came to see the C.S. Lewis stained glass window, but we stayed because the church felt like home.  Sean and I were married at St. Luke’s in 1989 by the Reverend Betsy Hooper, and my children, Heather and Fiona were both baptized and grew up in this church.  During my time here, I have been actively involved in ministries such as the Breakfast crew, Education for Ministry, the search Committee for a music director, the finance committee, and as a member of the Vestry and a former senior warden.” Linda also serves as reader and lay Eucharistic minister. 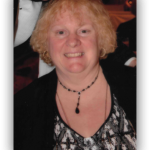