was born and raised in Spring Valley, IL, a small town in the north central part of that state. He moved to southern California as a senior in high school. He has worked in the computer industry since he was a sophomore in college at UCLA, spending most of his career doing consulting or systems support for software and services vendors. He is currently a senior IT Systems consultant for Kaiser Permanente.

He and his family were baptized into the Episcopal Church in 1985 at St. Bede’s in Mar Vista, when his sons Zach and Ben were 6 months and 3 years old, respectively.

He met Karen, his second wife, through a common friend,when Karen was living in New England. When they met, Karen was in the process of adopting Anjali, their first daughter, as a single parent. They married, adopted Anjali, who is now 12, settling the family in Mar Vista to be close to their extended family. Phil left his job with a consulting firm, accepting a position with Kaiser in Pasadena shortly after their marriage. In late 2013, they decided to become foster parents, bringing a second daughter into the family. Darla is 16, and they plan to adopt her later this year.

Phil started attending St. Luke’s in 2012 and has found it to be a wonderful, supportive community. 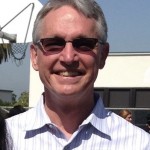