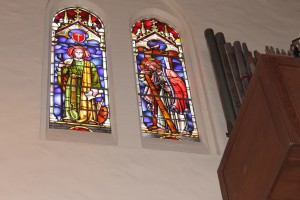 The Lunch Bunch has been going strong for over 20 years. Starting as a women’s prayer group after a retreat at Saint Mary’s Retreat House in Santa Barbara, it evolved into a co-ed fellowship group. The Lunch Bunch’s secret for survival is that it has no organization, no officers, and no budget! The group meets monthly on the second or third Saturday (except June, July & August) and enjoys a pot-luck lunch followed by a program. The eclectic assortment of presentations have included reflections on “favorite biblical characters,” current affairs, parishioner travelogues, and master classes by local experts on topics ranging from the History of Sound Recording to St. Luke’s beautiful stained glass windows. They have even explored the foods and cooking that were common in Jesus’ time. Each Lent, the group also makes the small palm crosses distributed during the Palm Sunday service. In December, the group celebrates the season with a party and exchange of small gifts. Participants are enriched and sustained by the care, support and fellowship of the group. Lots of laughter is one of their cornerstones!