Welcome! To help you to worship with us, and understand a bit more about our church and traditions, we offer this document as a brief introduction to the Episcopal Church and its ways. 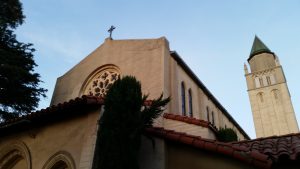 The Episcopal Church is the American off-shoot of the Church of England, and is therefore a member of the “Anglican (English) Communion.” The Church of England split from the Roman Church under Henry VIII in the 16th century. When the Church of England spread abroad with the British Empire, sister churches sprang up. These churches, while autonomous in their governance, are bound together by tradition, scripture, and the inheritance they have received from the Church of England and its Catholic roots. The “Anglican Communion,” is represented around the world by the Archbishop of Canterbury.  Counting over 80 million members, it is the second largest Christian body in the world. The Episcopal Church came into existence as an independent denomination after the American Revolution. Today it has between two and three million members in the United States, Mexico, and Central America, all of which are under jurisdiction of the “Presiding Bishop” of the Episcopal Church, (currently The Most Rev. Michael Curry.)

Bishops in the American Episcopal Church are elected by individual dioceses and are consecrated into the “Apostolic Succession,” considered a witness to an unbroken line of Church leadership beginning with the Apostles themselves. The American Episcopal Church has ordained women to the priesthood since 1974.  In 1988 the Diocese of Massachusetts elected the first Anglican woman bishop, Barbara Harris. In 2003 the Diocoese of New Hampshire elected Gene Robinson as their new bishop, the first priest in an openly gay relationship to be consecrated a bishop in a major Christian denomination believing in the historic episcopate.[b] 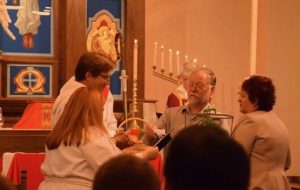 Episcopal churches are built in many architectural styles; but whether the church be small or large, elaborate or plain, your eye is carried to the altar, our holy table, and to the cross.

On or near the altar there are candles to remind us that Christ is the Light of the world (John 8:12). Often there are flowers, to beautify God’s house and to recall the resurrection of Jesus.

Episcopal Church services are congregational.  In the pews you will find the Book of Common Prayer, which enables the congregation to share fully in every service. The large print is the actual service. The smaller print gives directions to ministers and people for conduct of the service.

You may wonder when to stand or kneel. Practices vary, even among individual Episcopalians.

The general rule is to stand to sing hymns (found in the blue hymnal in the pews) and other songs (many of them texts from the Holy Bible) called canticles or chants and printed as part of the service. We also stand to say our affirmation of faith, the “Creed,” and for the reading of the Gospel lesson before the sermon. Psalms are sung or said sitting or standing. We sit during readings from the Old Testament or New Testament Letters, the sermon, and the choir anthems. We stand or kneel during prayers to show our gratefulness to God for accepting us as children, or as an act of humility before God.

The Episcopal Church observes the traditional Christian calendar. The season of Advent, during which we await and prepare for God’s incarnation (aka, Christmas), begins on the Sunday closest to November 30. Christmas is not just a day, it is a season, which lasts twelve days, after which we celebrate the feast of the Epiphany (January 6).

Lent, the forty days of preparation for Easter, begins on Ash Wednesday. Sunday’s during this season are not considered a part of Lent, but rather “in Lent,” which is why if you count all the days between Ash Wednesday and Easter, you end up with more than 40 days. Easter is also a season.  It begins with the Sunday of the Resurrection and lasts fifty days, concluding with the feast of, and followed by the season after, Pentecost.

During these times the Bible readings are chosen for their appropriateness to the season. During the rest of the year – the season after the Epiphany and the long season after Pentecost (except for a few special Sundays) – the New Testament is usually read sequentially.  The lesson from the Hebrew Scriptures (aka, “the Old Testament”) usually corresponds in theme with the New Testament readings

To add to the beauty and festivity of the services, and to signify their special ministries, the clergy and other ministers wear vestments. Choir vestments usually consist of an under-gown called a cassock (usually black) and a white top called a surplice. The clergy may also wear cassock and surplice from time to time.

Another familiar vestment is the alb, a white tunic with sleeves that covers the body from neck to ankles. Over it (or over the surplice) ordained ministers wear a stole, a narrow band of colored fabric. Deacons wear the stole over one shoulder, priests and bishops over both shoulders.

At the Holy Eucharist a bishop or priest frequently wears a chasuble (a circular garment that envelopes the body) over the alb and stole. The deacon’s corresponding vestment has sleeves and is called a dalmatic. Bishops sometimes wear a special head covering called a miter.

Stoles, chasubles, and dalmatics, as well as altar coverings, are usually made of rich fabrics. Their color changes with the seasons and holy days of the Church Year. The colors are white (Christmas and Easter), red (Holy Week and Pentecost), violet (Lent), green (season of Epiphany and after Pentecost), and blue (Advent).