was born in Berkeley, California, a sixth generation Californian and a third generation native.  His father enlisted in the United States Navy in 1943, and Steve and his mother stayed with family and friends until they moved to Monrovia in March of 1945.  Steve’s father was a Monrovia native, and his paternal grandmother’s family had lived in the community since 1888.

Steve began attending St. Luke’s in the fall of 1960 after being introduced to Morton Kelsey, who became a friend and valued mentor.  He was confirmed in May of 1961, and was an active member until leaving Monrovia in 1962.  A visit with Morton Kelsey in 1967 led to a return to Monrovia and St. Luke’s and an active membership now spanning fifty years.  During those fifty years Steve has sung in the choir, served on committees, been a member of the Vestry with service as junior warden and clerk, and filled the position of parish administrator.  Steve recently completed his fifth year as parish treasurer.

Steve is utterly convinced that St. Luke’s is a profound place of healing, both from personal experience and from watching the lives of those around him.  We do indeed heal the world one welcome at a time.  Vestry service for Steve means strengthening our parish physically and financially so that we may continue to expand our role as a place of healing. 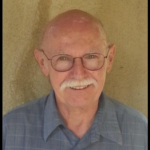